They are very similar and have the same personalities. They must be different in order to be considered separate breeds. You got it. We will be comparing each breed to show you the subtle differences. You might find that one of these differences is enough to help you choose the best pooch for your family.

So, before we start cheeseing you with all these tongue-twisters let’s get into the details about these cheese-loving Swiss dogs ! 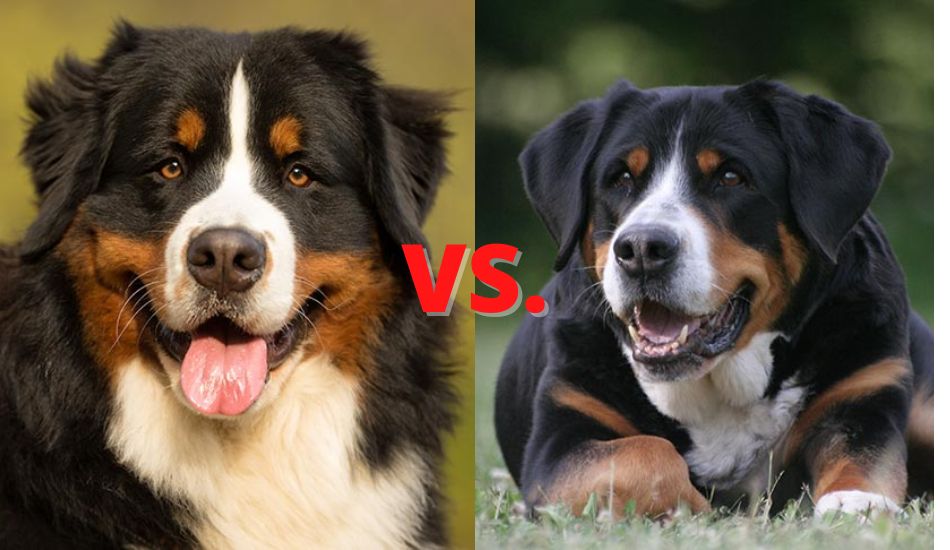 The Bernese Mountain Dog is very similar to the Greater Swiss Mountain Dog. This is due to their similar pasts .. However, there are some differences that make them distinct breeds.

The Bernese Mountain Dog hails from Bern, Switzerland . Bern is a region known for its dairy farms that produce milk, cheese and other products. The Berner has been used for centuries as a herder, protector of the farm, and .cart puller. He was known to pull many times his own weight and was an integral part of the farm. But in the 20th century, his numbers started to dwindle because he was slowly being replaced by tractors and other vehicles.

Swiss breed lovers recognized that they needed to take action to save their breed. A professor called Albert Heim established the Berner breed club in 1907. But it wasn’t until 1926 that his American history began. One Kansas farmer imported a pair and the rest is history. In 2020, he is the 22nd most popular dog breed in America, according to the American Kennel Club (AKC).

The Greater Swiss Mountain Dog is a much older dog breed than the Berner. It is believed that the Swissy dates back as far as the Roman era. His ancestors are believed to have been Julius Caesar’s Mastiff war dogs. This is why he’s known as the “greater” one.

He is also a foundation for the four Swiss breeds ,, and the largest. Contrary to popular belief, the Greater Swiss is also a component of the Saint Bernard.

He is not restricted to one area like the Berner. He was also used for farm work, much like the Berner. His specialist skill was to lift heavy-laden carts stuffed with meat and dairy to markets. He was much larger and more powerful than the Berner.

The Berner’s his numbers decreased as a result of the advent of mechanical transport. Albert Heim, the founder of the Berner club, established the Swissy club two more years later and advocated for their recognition as their own breed.

The Berner has a longer and shaggier coat than the Swissy, whose coat is much shorter and tighter. Both have thick, double-layered coats. However, the Berner is more meticulous about grooming. Both breeds have the traditional Swiss colors of black, white and rust. Both have the white blaze markings on their muzzles and foreheads. Because of the Berner’s shaggy good looks and similar size, they are often mistaken for a Saint Bernard with a black coat.

Their temperaments are similar but different. They both make great family dogs .. Both are affectionate and loving, and can fit into your lap. We hope you enjoy the feeling of having legs that aren’t there!

They love their humans and would do anything for them. These two dogs are great guard dogs, just like the farm guards. Although they might not pick a fight, they will finish off anyone who tries to harm their family.

The Swissy is the most guardian of the two breeds and has a dominant personality. The Berner can be adopted by an experienced dog owner.

The Berner is the cuddliest of the two breeds. This is because he is more laidback than the Swissy. This is one of the reasons why they are a popular parent breed for several designer Berner mixes.

If we had to pick one breed that would win the gentle giant award it would be the Berner. The Swissy, a more serious farm dog, needs more interaction to keep him happy.

Both the Swissy and the Berner need an hour of exercise each day . They don’t care if snow is on the ground. In fact, they love it. They are giant dogs and need to be able to take long, leisurely walks around the park or nature reserve. Both dogs love fresh air and can get cabin fever from being cooped up too much.

Due to their large bodies and joint, they should not be exerted too hard as puppies. Too much impact can lead to developmental anomalies , so avoid excessive activity.

*The Berner is the more laidback dog. He has less interaction during the day. You’ll know it when his loud snores echo around the house. He is more than happy to sleep for a few hours. To burn that extra energy, the Swissy needs more interaction every day. Think more intense playtimes, challenges, and a need for durable dog toys.

Both the Swissy and Berner are intelligent and trainable dogs. Both dogs respond well to positive reinforcement training and have a tendency for sweet treats. There are many of them, so you have to be careful. This will be discussed in more detail in the nutrition section.

The main difference in their training is that the Swissy is a dominant breed of dog and needs a stronger owner .. His new owner must be familiar with large dominant dogs. To be fair, the new owner must be strict about the rules of their house. Although the Berner needs to be trained consistently, he isn’t as intensive as the Swissy.

Because they can be protective dogs, it is important to socialize them from a young age . It’s a difficult task for owners to socialize large dogs with other dogs. If they are not socialized, their adult size can make them difficult to manage. You should expose them to as many dogs and other animals as you can.

The Berner and Swissy are large breeds and should be expected to live longer than other breeds. It might surprise you to find that the shorter lifespan . is the smaller one. The Berner is expected to live between 7 to 10 years, and the Swissy lives between 8 and 11 years.

They are generally healthy, though the Swissy is the most healthful of the two breeds. Both elbow, and hip dysplasia , are common in the Berner. The Swissy, being a heavier breed, is more likely to develop shoulder dysplasia. This is less common than other types of joint dysplasias. Both are susceptible to eye problems, including progressive retinal atrophy (PRA) and cataracts.

The Berner should also be screened for heart conditions such as dilated cardiacmyopathy. Von Willebrand’s Disease is another condition that can be passed on to the Berner. A reputable breeder will screen him for these conditions and only produce healthy dogs.

The Berner will eat between 3-4 cups and 4-8 cups per day while the Swissy will eat between 4-5 cups. Their size, energy level, and age will all affect how much they eat. They are prone to easy weight gain ,, especially the Berner who is known for his laidback lifestyle. Obesity can cause further health problems so make sure you monitor their food intake.

They should be fed a balanced diet with high quality protein and healthy omega fats. High-quality food will contain real meat proteins, vegetables, carbohydrates, fiber, vitamins, and minerals. Another important ingredient to be aware of is glucosamine, chondroitin , that will support large joints.

As giant breeds, they should both be fed a kibble that is specifically designed for giant breeds, especially as puppies when their growth is quite rapid. They will get the nutrients they require. This is especially important in the early stages of development. Research shows that they can help to prevent or delay bone diseases such as hip, elbow, and shoulder dysplasia that both breeds are already prone to.

Their grooming requirements are different which can sometimes be a major consideration when families try to decide between the breeds. The Berner is the only Swiss mountain dog with a silky long coat. This means his grooming routine is more intense that the Swissy. The Berner needs brushing two or three times a week, and likely a need for de-shedding at least twice a year with a proper tool.

Compared to the Swissy who only needs to be brushed once per week. To keep the Berner’s shedding under control, it is best to brush him a bit more often during the shedding season.

They both need bathing once every 8 to 12 weeks. A shampoo that contains conditioning ingredients would be a good choice for the Berner. This will keep hair from getting tangled. A concentrated shampoo that is suitable for double-coated dogs should be considered. This will give your hair a deeper clean.

Additionally, they are both dry-mouth dogs. This means that drooling should be minimal. However, like all dogs, there may be some doggy dribble in your home and on your favorite clothes.

The price of a puppy Berner starts from around $1,500. Which is slightly less than the cost of the Swissy, which starts at about $2,000. Because the Swissy is a rarer breed and is larger, this is to be expected. Expect to pay more if you’re looking for a puppy of an award-winning lineage.

Always ensure that you deal with a trusted breeder so you can meet the puppies and their parents before making any financial commitments. They will not only breed healthier dogs but will also love them and start the socialization process.

The Greater Swiss Mountain Dog and Bernese Mountain Dog are very similar because they are closely related . The Swissy is one of the oldest breeds of Switzerland, and is also the foundation for all four Swiss breeds. Although he is a descendant from the Swissy, the Berner is only localized to the Bern region. They are both cousins or nephews.

It is their size, coat, and trainability that will often decide which breed you choose. No matter which breed you choose, you will be getting an elegant giant who is well-suited for family life. You’ll soon find that Swiss cuddles are the best, as long as you make sure they have enough food and water.