The Caucasian Shepherd is very similar to the Tibetan Mastiff. They look very similar and they act the same because they were bred to serve similar purposes.

Have you ever been to the point where you compare the Tibetan Mastiff vs. Caucasian Shepherd for your next family pet? There are some differences that could convince a family to adopt one breed over the other. This guide will discuss the similarities and differences between these breeds so that you can decide which one is right for your family.

They were both bred to be protective. Both are challenging dogs. Neither one is suitable for a novice dog owner so only experienced handlers should apply. You will get the most loyalty and love from your enormous dog, but it is a lifelong process.

They are both making their way into families across America seeking flocks in the day, and relaxing on comfy sofa cuddles at night, instead of their mountain lifestyle. Let’s have a closer look at what these two guys are like! 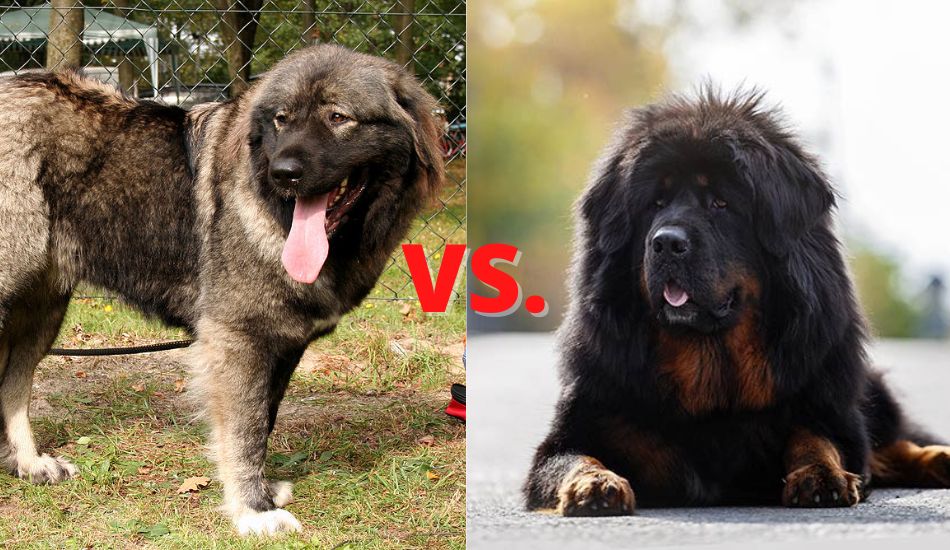 Although the Caucasian Shepherd is distinct from the Tibetan Mastiff, it is believed they are related, so their histories may be intertwined. It is easy to mistake one breed for another. Let’s find out more about each breed’s past before we compare traits.

The Caucasian Shepherd can also be called the Caucasian Ovcharka or Kawkasky Owtscharka. He is an ancient Molosser dog who is around 2,000 years old and descends from Mastiff-type dogs (believed to be the Tibetan Mastiff and another larger breed). He is a descendant of the Caucasus Mountain Range, which lies between Europe and Asia (formally Russia).

*His original purpose was not to look after his cattle or flock in the mountains, but to protect his human master. There are other Molosser breeds that look the same, as many of these dogs share similar traits and looks.

*He was the preferred breed for military personnel in Eastern Europe. He is still bold and protective, but he is gradually finding his way to the homes of big loving families who are looking for large protective dogs that love cuddling their family. Although he is not officially recognized by the American Kennel Club, he is slowly making his way towards a fully identifiable status.

The history of the Tibetan Mastiff is somewhat secret, because Tibet, where they are from, has always been isolated. Their people have kept Tibet’s territory very secure. We know that they were the protectors of the Temples in Himalayas. They worked at the temples with small Lhasa Apsos who would alert their colleague the Tibetan Mastiff to danger. The Tibetan Mastiff would then spring into action to guard the Temple and the monks.

It was in the 1950s that the Tibetan Mastiff came to America as a gift to the President, but he kept them a secret, and it wasn’t until 2 decades later that a few more were imported and the love affair with this big breed began. In 2020, the Tibetan Mastiff is listed by the American Kennel Club as the 131st most popular breed in America.

Although they look very similar, the Tibetan Mastiff and Caucasian Shepherd are quite different. You should consider their size before you buy one of these dogs. If you live in an apartment, you might want to consider another breed.

Both have extremely fluffy coats that can shed a lot. The Caucasian Shepherd can have three coat styles, medium and long. The Tibetan Shepherd only has one. Both have double-layered coats that will keep them warm in the Himalayan or Caucasus mountains.

They both come in shades of brown, black, gray, and brown. However, the Caucasian Shepherd leans towards lighter colors while the Tibetan Mastiff leans towards darker and blacker colors. Both Breeds are often mistaken for long-haired English Mastiffs.

Both the Caucasian Shepherd as well as the Tibetan Mastiff were big dogs bred to guard Temples and work at high altitudes.

They will protect their family and friends if they are in danger. They will not attack unless they have to. Instead, they will stand guard and defend their flock. They are formidable when they are on guard and have a bad reputation for being ferocious.

They are loving and affectionate creatures that love to spend time with their families. They are very affectionate with their family despite their large size. However, because they are so big, they shouldn’t be left alone. Both are gentle giants and have little interest or time for intense exercise.

They are both very territorial, and this trait should be taken seriously. You should not have a territorial dog.

Being a single flock protector and temple guard, they both enjoy spending time outside in the fresh air with their own company. As long as they have the right shelters, they will happily spend their days outdoors. They should be placed with a family that offers them lots of living space, indoors as well as outdoors.

Both the Tibetan Mastiff and the Caucasian Shepherd are very low-maintenance when it comes to exercise. They don’t need a lot of interaction or intense exercise.

They both need between 45 and 60 minutes of walking every day, simply to stretch their large legs and get their hearts pumping. They would rather have a bigger garden to explore and run in than interactive games.

These breeds are not suitable for novice dog owners. They are both very stubborn and independent, which means they won’t take notice if you don’t want to train them. These guys are a mix of Mastiff and Shepherd time. They are both food-orientated and could be persuaded to eat a few treats, but not too many.

They are territorial by nature and need to be socialized from a young age so they don’t become aggressive or protective. They will no longer feel the need for protection outside the home. Therefore, it is important to socialize them regularly with other dogs and people.

They both need a strong leader who is able to commit to lifetime training. If either breed detects weaknesses in your training or personality, they will assume the pack leader role, which can lead to behavior problems. Both breeds would benefit from obedience training together with other dogs, instilling discipline, and understanding that they are not in control.

Because they’re both large dogs, both are at risk for Hip Dysplasia, which can eventually lead to mobility problems and painful arthritis due to poorly formed hip joints. They are both susceptible to other joint problems due to their rapid growth during puppyhood.

The other main health concern for both breeds is obesity. Both breeds are prone to gaining weight because they eat a lot but move very little. You will need to keep an eye on your dog’s weight and switch to diet kibble if it starts to rise.

The Tibetan Mastiff is also known to suffer from Canine Inherited Demyelinative Neuropathy, which is an inherited disease only found in Tibetans. His back legs will become weaker after six weeks. This will eventually lead to paralysis. These conditions cannot be cured. Only selective breeding can help.

Overall, they are both healthy dogs who enjoy a lifespan of 10 to 12 years, which is quite good considering their large size.

The Caucasian Shepherd, Tibetan Mastiff and their four cups of food per day are the same sizes. Caucasian Shepherds have a sensitive stomach, and should only be fed a high-quality kibble designed for the breed.

Foods that cater to giant breeds will meet their nutritional needs. You’ll likely need to be patient in finding a food brand for either breed, as they both can be particular about the food they eat.

When it comes to feeding these guys, you need to make yourself aware of Bloat, as they are both prone to this potentially fatal condition. do NOT feed them immediately after or during exercise ,. Give them 2-3 meals per day and check for any symptoms.

Both the Tibetan Mastiff and the Caucasian Shepherd will need to brush their hair every day to keep it from becoming matted and tangled. Brushing your dog’s coat with a furminator helps you remove dirt and spread natural oils. You’ll want to use a tool like the Furminator to de-shed your pup on a weekly basis, as well as use an anti-shed shampoo in order to cut down on pet dander.

For these guys, a slick brush or a de-shedding tool is a must, and pay attention to their feathering fur and sensitive areas such as armpits and neck! These guys will need to take a bath at least once every 6-8 weeks. A walk-in tub or shower is a good option.

It is important that you work with a respected breeder, especially for dogs who are territorial and protective. They need to be properly cared for. This is why puppy mills won’t be concerned about this. You will likely find a puppy that has both behavioral and health problems.

If you’re thinking of rescuing these wonderful dogs, you may need to search harder because they are rarer than the standard breed. But once you find one, it will be well worth the wait!

Be sure to check out the Tibetan Mastiff Rescue website where they are dedicated to rehoming Tibetans across America. As Caucasian Shepherds are much rarer, a dedicated website is not available, but the Facebook Caucasian Shepherd Club of America group will be able to point you in the right direction on your way to rescuing a Caucasian.

When comparing the Caucasian Shepherd with. You’ll be able to see that the Tibetan Mastiff and Caucasian Shepherd are very similar. This is due to the fact that they are related, and they serve the same purpose. Their appearances and sizes are the only differences between them. The Tibetan Mastiff is smaller than the other breeds. His large size and preference for overall appearance is often the deciding factor.

You can expect a difficult dog that requires consistent training and low energy. Both dogs are happy to spend time with their families, but they can also be trusted to protect the family.