The Chesapeake’s personality is very different from the Labrador . He is more social and happy-go-lucky, while the Labrador is always happy , and will prefer to be sat with his humans.

Whether you’re looking for more information on how to choose between the two Retriever breeds or just to improve your dog knowledge, you can read on to learn the differences between these almost identical-looking breeds. 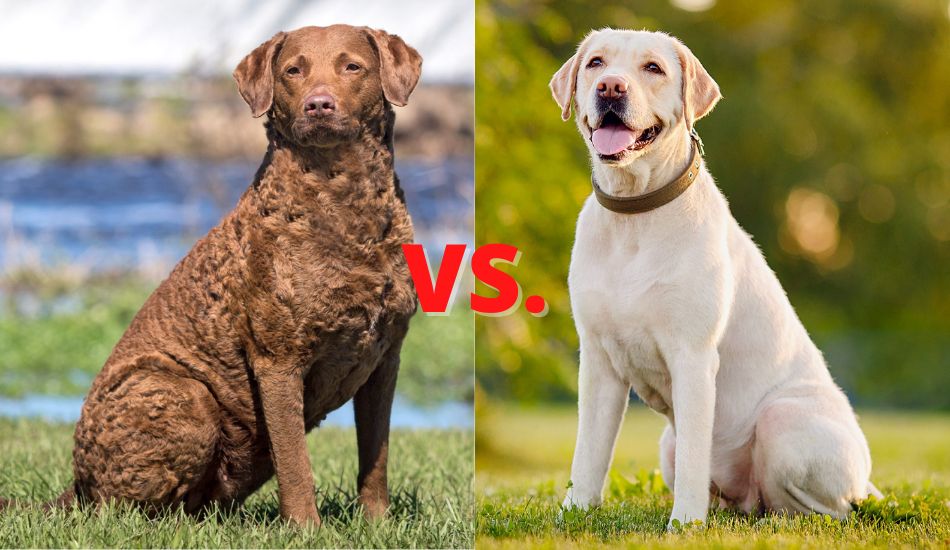 Despite the similarities in appearance, they are not directly related and have different histories. There is one commonality between them: some believe the Chesapeake is an ancestor to the Silver Labrador because of the Silver Labradors’ inheritance the diluted coloring gene. However, this is a theory and not a fact.

During the 19th Century hunters from the Chesapeake Bay area sought to breed a dog that was capable of hunting the 200-mile long estuary for a full day without tiring easily. His genetic mix includes Irish Water Spaniels, Newfoundlands and other unknown canines. The Chesapeake was one of the original nine canines that were registered in America in 1878.

Today he is still mainly used as a working dog, not only in hunting but he is also used as a drug detection dog as well as a therapy dog. The American Kennel Club (AKC) has currently ranked him as the 45th most popular dog in America.

The Labrador Retriever is also a 19th Century doggo from Newfoundland in Canada. He was primarily a hunting dog, who also worked on the water collecting small water mammals and fish. British visitors were super impressed by their water hunting skills and so they took them back to Britain where they refined and renamed him the Labrador Retriever.

They are now more known for their affectionate traits and for being family pets. According to the AKC, he is currently the most popular dog breed in America. While there are differences in the field vs. bench labradors, the Chessie and the Labrador are two completely different breeds (although they come from similar lineage).

Their coat is the most distinguishable among the breeds. The Chesapeake is a Labrador who has had his hair done by a hairdresser. He has a short but thick outer coat that is very wavey and oily; this acts as a waterproof barrier from the freezing ice and water on the Chesapeake Bay, similar to how duck’s feathers work. Waves can form on his body or cover his entire head.

Under his excellent fur coat, he also has a wooly, short undercoat that keeps him warm. Similar to the Labrador, but without the thick, lustrous hairs. The Labrador comes in three different colors: yellow, brown, and black. While the Chessie is only available in a variety of browns, it comes in all three.

The Chessie and the Labrador are identical in their weight, with the males weighing between 65 and 80 pounds, and the females weighing 55 to 70 pounds.

The Chesapeake also has a deeper chest than the Labrador, which almost acts like a plow against the snow and thick icebergs whilst chasing his prey. The Chessie is a more streamlined and defined version of the Labrador. They are both strong and thick in appearance.

They also have large, drop-down ears that reach the level of their muzzles. Both have a thick, otter-like tail that they use to guide themselves in the water. Despite their sturdy working appearance, they both have cute and friendly faces with the ability to deploy their big ‘puppy dog eyes’ at any given moment.

This is the difference between the Labrador and the Chesapeake Bay. The Labrador is the #1 choice of dog in America, mainly because his temperament is so kind, gentle, and loving, everything that suits a family! He’s friendly and playful, and loves to play with his pack. The Chesapeake, whilst also affectionate with his family, is either indifferent or suspicious of strangers and other animals, and as such he is not as easy going as the Labrador.

The Labrador would make for a terrible guard dog, he sees everyone as his playmate and invites anyone and everyone to rub his belly, whereas the Chesapeake, being aloof with strangers, will let you know if someone he doesn’t like makes an appearance.

The Chessie is a great choice if you’re looking for a non-traditional guarddog. You must be aware that he needs a firm master who will commit to intense training sessions, and who will not let him be unruly in the house. A happy-go-lucky life philosophy is not the best for the Chessie. The Labrador makes a great family pet in an easy-going home.

Although both are working dogs, the Chessie is the more serious pup . He would thrive in either a hunting or working environment. His strong personality requires a stronger master. Although the Labrador is a great hunter, he prefers to have a balanced day that includes work, play, and snacks.

Additionally the Chessie can be a dominant breed and is not suitable for first-time owners. He is also known to be protective of his family especially his master, and as such he can be an intense dog if he isn’t living with a suitable family or environment. If this is something you feel would be beneficial for your life, the relationship you have with your Chessie can be very rewarding.

The Chesapeake and the Labrador are considered to be high-energy dogs, and they both need at least 60 minutes of intense exercise a day at the very least. Do not think they can be faffed off by a quick run around the yard. They will return the favor with destruction and chewed household objects.

They both require activity that is going to get their heart pumping, and as they are both water pups, they would love it if you took them to the local lake and let them run and swim after sticks or balls.

The training requirements of the Labrador and Chesapeake are different. Whilst they both need early socialization and general training, as with any dog, the Chesapeake needs a higher and more intense level of obedience training. Obedience training is imperative to ensure that your pup grows into a well-mannered pet who respects pack members and the boundaries that are set.

In addition to this, the Chesapeake also needs continuous obedience training so that he also knows that he is not, and never will be, the pack leader. He can be a dominant dog and may challenge his master. This is why he should not be a first-time owner and certainly not one who is gentle and calm.

Establish the rules immediately, be firm, and don’t be afraid to seek professional help if you feel that you need it, for he is a challenging pup. They are fun to be around once you have mastered them.

The Chesapeake and the Labrador are generally healthy pups, with the Chesapeake living for one more year on average than the Labrador. They are both prone to Elbow and Hip Dysplasia, which is an abnormal formation of their joints; this is a common health issue found in many dog breeds. They should both obtain an Ophthalmologist evaluation, which is an evaluation of the eyes, and an Exercise-Induced Collapse DNA test.

Additionally, the Chessie’s parents should also be tested for Progressive Retinal Atrophy, which is the degeneration of the retina over time, and Degenerative Myelopathy, which is a breakdown of the spinal cord which can eventually cause paraplegia.

For more in-depth information on the recommended tests and other potential health issues please see the national breed club websites of the Chesapeake and the Labrador.

The Chesapeake as well as the Labrador should consume 2/3 cups of food each day. They will need more if they are working dogs.

The Labrador is more food orientated than the Chesapeake, so be sure to monitor his treat intake, especially if he is sedentary throughout the day, for he can easily and quickly transform into a chunky canine.

Due to the Chessie’s super repellent coat, dirt tends to sit on it and as such he’ll carry it straight into your house. Owners often say that it is more important to value your dog’s company than having a clean house. If this is something you can not compromise on, you might consider the Labrador, or another breed.

Daily brushing is suggested to keep his coat manageable and dirt-free, which in turn will save you getting the vacuum cleaner out on a daily basis! The Labrador will require brushing 2 or 3 times a week to keep him looking healthy.

The Chesapeake has a thicker coat and will require less bathing than the Labrador. The Labrador will need a bath once every six weeks or so, whereas the Chesapeake will only require a bath 4 times a year. It is important not to wash the Chessie anymore than this, even though he does have a stronger dog odor, as his coat is naturally oily and this is how it should be kept, otherwise you’ll damage his natural coat.

Overall the Chessie is calm and affectionate. He will watch over his property and protect it no matter what. The Labrador is the affectionate, clingy type. He wants to be friends with all people no matter their intentions.

As long they have the right environment, get the proper training, and exercise, they can be great dogs.

So, whatever duck-hunting canine makes your heart pound, you’ll have a companion that will be a joy and a loving member of your family.