Quick Summary: The Dachshund, also known as the sausage dog because of its looks, is a very popular dog. The Corgi is also a popular family pet, and the AKC has ranked this pooch just behind the Dachshund at number 13. As a mixed breed, the Dorgi is a small dog with a body similar to its parents (only a bit smaller and shorter). They’re playful little dogs who love to be the center of attention and participate in everything. Although its Corgi parents are heavy shedders, the Dorgi doesn’t shed as much. Dorgis are generally healthy dogs with a life expectancy of 12 to 15 years.

What do you get when a Dachshund crosses with a Corgi dog? A Dorgi, of course! Queen Elizabeth II of England was a big fan of Corgis and has had over 30 in her life as well as a few Dorgis. While the Dachshund is very different from the Corgi, there are some striking similarities. They make a great mixed-breed pup.

Both Dachshunds and Corgis have become popular mix-breed dogs in recent years. Corgis are also extremely popular when combined with huskies or mixed with beagles.

So, the Dachshund and Corgi must have something that earned them the royal seal of approval. Although the Dorgi is another new designer mix breed, he is becoming very popular and seems to be here to stay. 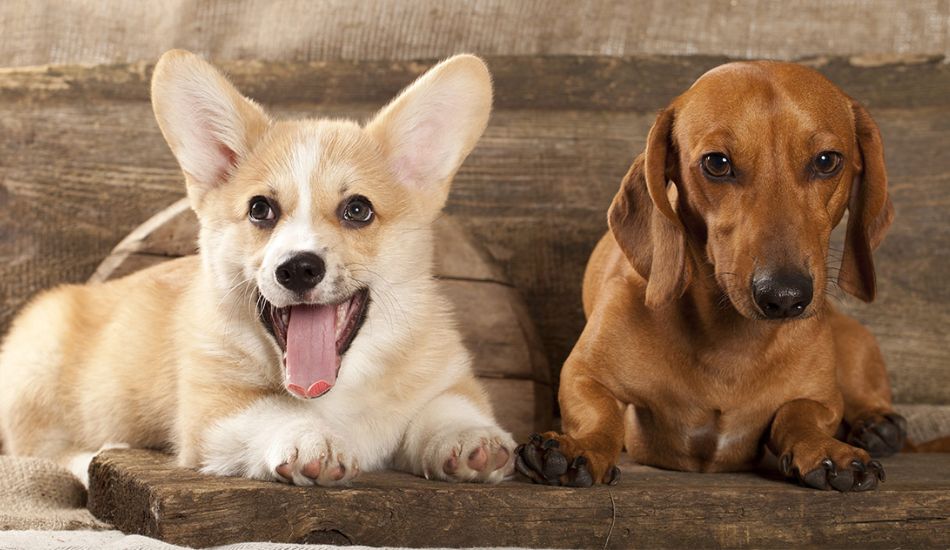 The Dachshund is also known as the sausage dog because of his long, hot-dog-shaped body. He was originally bred in Germany as a hunting dog. His size was slightly different from his current size.

Dachshund in German literally translates to Badger Dog, and this was primarily what he hunted, and he was even used to hunt wild boar in packs. His wide, paddle-shaped paws are ideal for digging in the ground to catch prey. He also has loose skin that allows him to slide through tight tunnels.

The Dachshund is now a popular family pet all over the world and has been ranked number 12 out of 193 breeds by the American Kennel Club (AKC). Many dog lovers love his iconic appearance and bright personality. He is a wonderful family pet and makes a great companion for both children and adults.

There are two types of Corgi – the Pembroke and the Cardigan. They are both very similar and named after places in Wales, UK. He is loved by royalty all over the globe, but he is most famous as Queen Elizabeth II’s favorite breed. She has owned many of them, and there is even an animated film entitled The Queen’s Corgi.

Most people don’t know this, but the Corgi was and is still used to herd cattle. This brave little dog is agile, quick, and intelligent. It is also a popular family pet, and the AKC has ranked this pooch just behind the Dachshund at number 13. The Corgi’s behind is also particularly famous and is fondly called “Corgi butt.”

As you can already tell, combining the Dachshund and Corgi will result in a truly cute and playful pooch!

These guys are low to the floor and have short legs but will still turn heads in any room. The Dorgi is a small dog with a body similar to his parents:

This plump, small-sized dog is strong and sturdy. His fur can be a combination of any of the popular colors. It can either be long, smooth, or wirey like the Dachshund or dense and short like the Corgi. His coat is excitingly like Forrest Gump’s chocolates. You never know what you might get next in this brilliant genealogy.

His parents are both full of life and playful, and this boy is no exception. Dorgis are playful little dogs who just love to be the center of attention. Although he will play tug-of-war, it is important to remember that he can defeat a Badger! He will happily play tug of war with you, but if he can overpower a Badger, he’s not to be underestimated!

Dorgis can be a vocal breed. His bark can sometimes be loud and piercing. If he needs something, he’ll let you know. This makes him a great guard dog! His bark sounds big, and it doesn’t sound like the bark of a small dog. He will alert passers-by to his presence and be the first dog to bark in your doggy playground. He is great for apartment living if you can train him to be less barky. However, if he doesn’t behave well in the house, you should be ready for complaints from your neighbors.

Dorgis can be a happy, social breed and loves participating in everything. However, he has been known to suffer from separation anxiety, which he inherited from his Dachshund parent. This breed is not suited for people who must leave him alone for more than four hours. This pooch can be helped by soothing music and anti-anxiety medication. However, it is best suited for those who are able to spend more time with him.

If you have to leave the house, why not take him along? You can take him with you, or even in your handbag, as he is an adventurous friend. However, you should allow extra time for your outings because the Dorgi is adorable, and he knows it. He will stop at everyone and everything to get attention.

Dorgi is a smaller dog, and his parents were originally hunters and herding dogs. He needs a lot of exercise, despite being smaller. At least 60 minutes of exercise a day will suffice, and that includes walkies and playtime.

Dorgi can get anxious when left alone, so it is a smart idea to invest in toys that target mental stimulation such as treat-filled puzzle toys. This will keep their anxious minds busy while you are away and will give their brains a workout. If the Dorgi becomes bored or anxious, he will most likely become destructive. He will attempt to escape the house and begin a search for his master.

The good news is that the Dorgi can be trained quickly and easily because he is food-oriented. Don’t worry if your Dorgi doesn’t listen at times. This is the stubborn streak that he inherited from his Dachshund parent. He will soon learn to love you back! To avoid becoming a diva Dorgi, you should start obedience training as soon as possible.

Dorgi can be very standoffish and barky with other dogs, so socialize as soon as possible. You should make sure that his interactions with other animals are pleasant. When the Dorgi is confident that other animals are not a threat, he will stop barking at them and play until they get tired.

The Dorgi is prone to anxiety on his own, so he should quickly learn that you are not leaving him. It is a good idea to make a routine that will lower your Dorgi’s anxiety. To show your canine friend that you are not taking too long away, you can put on some soothing music, give him medication if necessary, and make sure you leave him with minimal fuss. You can also leave him for a shorter time and then increase the amount as you need. This will reduce his distress.

Positive reinforcement training is essential for any dog. However, be cautious with the size of treats and wean your Dorgi off them slowly once they have learned the command. Otherwise, he will soon become a spoilt and sloppy dog, which is not what you want.

The grooming of a Dorgi depends on the type of his coat. His fur will only need minimal grooming if it is soft and short. You will need to brush his fur daily if he has long hair. This is to prevent knots from forming and keep the hair as healthy and smooth as possible.

Although his Corgi parents are heavy shedders, the Dorgi isn’t as heavy. However, it all depends on your dog’s coat type. Regular brushing can help reduce this and keep your home as clean as possible.

The Dorgi can gain weight quickly if his diet doesn’t follow a strict plan. Knowing what food you should give him and sticking to it is crucial. You won’t have a healthy doggo if you give him unhealthy food. Gravity will also pull any extra weight around his middle, turning him into a banana-shaped dog. As funny as it may sound, his spine could really do without this extra weight.

It is recommended that he eat 2 cups of food daily. A Dorgi should be fed only good quality, non-growing food. This is to avoid the conditions mentioned earlier. A Dorgi can eat only small amounts of meat and wet food.

Dorgis can be healthy dogs generally. You should be aware of a few things specific to their breed:

IVDD affects 25% of Dachshunds, and the exact number is unknown in Dorgis as he is relatively new, but he can inherit this problem (so it’s always good to be clued up on this health issue). IVDD is a degenerative condition in the spinal discs. It basically means that the discs become brittle and can’t absorb energy or cushion as they should. If this happens, painful bulges and increased breakages are likely to occur. Surgery is required to prevent paralysis.

Because of the movement that their spine must give up, IVDD can be particularly common in short- and long-bodied dogs. While most dogs can climb stairs easily, it is possible for a Dorgi to fall down the steps. Since the Dorgi is slightly shorter than the Dachshund, this shouldn’t pose a problem. However, the Dorgi’s height is still a concern. The Dorgi’s short stature and energy make it even more important. Avoid jumping from high places like gardens walls, or beds.

Color-dilution alopecia, which is another skin condition passed on from the Dachshund parent, is characterized by loss of hair and color changes. Although it isn’t a serious condition, it can cause discomfort for your dog and make it look less pleasant. Although it cannot be curable, creams and medications can be used to treat the condition.

On average, a Dorgi pup costs around $500 from a reputable breeder and can be a cheaper alternative to the Corgi or the Dachshund, who start around the $1000 mark. If successful, the Dorgis can only produce 2-5 puppies per year. However, there are not many Dorgi breeders, so he may be hard to find.

Because he is small and doesn’t eat a lot, monthly food costs for the Dorgi aren’t very high. So, compared to other dogs, the Dorgi’s purse strings aren’t too tight.

The Dorgi is a wonderful dog. He is energetic, playful, and bouncy. However, he also has a big heart and enjoys snuggling up to his master at night.

You can have a royal relationship with your Dorgi as long as you can spend quality time together and not leave him alone at home for too long.