The French Bulldog’s most distinctive feature is its tall, bat-like ears. The English Bulldog’s best feature is his rolled, drooping skin on either side.

So, whether you’re trying to decide between the small-sized French Bulldog and the English Bulldog of medium size, you can read on to learn the details that will help you make the right decision. 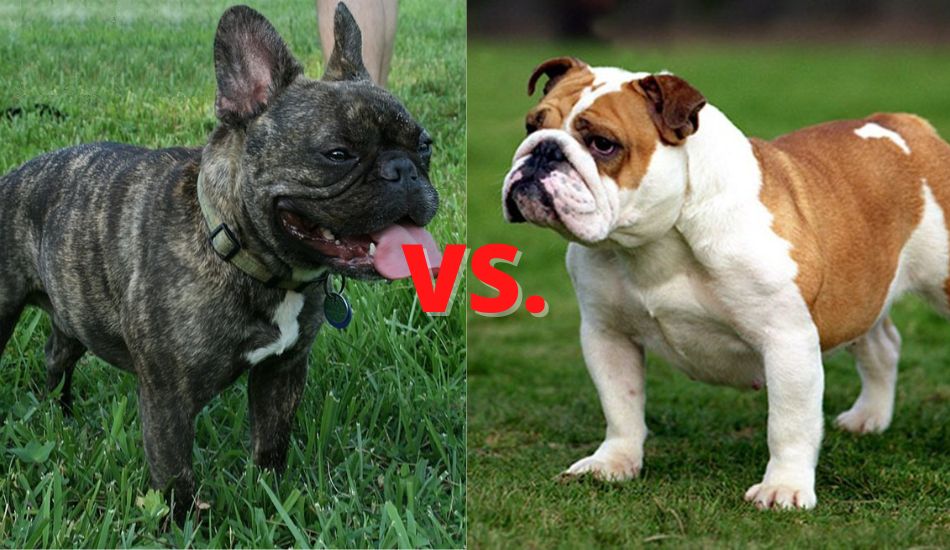 Despite his name, the French Bulldog is not French; he hails from England. In the mid-19th Century, smaller English Bulldogs became very popular with the lace traders in central England, particularly around the markets of Nottingham. The traders set sail across Channel with their pups to France when the demand for their lace declined in England. The smaller Bulldog was a hit almost as soon as he arrived.

He was crossed over many decades with smaller breeds like the Pug and possibly other Terrier-type canines. He eventually found his way to Paris, where he was welcomed by the French aristocracy. He is commonly mistaken for the Boston Terrier.

Towards the end of the 19th Century, he spread his wings and became popular across Europe and America. It was the Americans who insisted that he keep his iconic bat ears. His popularity in England was not as strong, however, because the English nation was extremely protective of their Bulldog and felt that the French Bulldog’s popularity could threaten their national symbol.

However, he is still very popular. Thanks to his adorably alternative features and playful persona, the American Kennel Club (AKC), in 2019, ranked him as the 4th most popular dog breed in America.

It is believed that the English Bulldog was developed in the 13th Century in England for the purposes of Bull Baiting. The English Bulldog in those days was ferocious, and their jaws were tremendously strong, and it seemed that he could never be injured in the ring.

In 1835, this cruel blood sport was made illegal, and the fighting went underground. The spectators desired a stronger dog, and so they crossed English Bulldogs with Terriers. American Pitbull Terriers were created.

The English Bulldog was unemployed. To save it, fanciers crossed them to be more tender and more friendly in their temperament.

The once-tough canine quickly became a loving rogue and makes a great pet. While he is the face of many famous companies and sports teams around the globe, he is most well-known for his close association with Sir Winston Churchill. Many nations knew him as “The British Bulldog,” a bulldog who was tenacious and unrelenting in his courage. His main traits were a stern, droopy smile.

The most noticeable difference between them is in their ears and skin. The French Bulldog has tall ears, which resemble a bat. The ears of the English Bulldog are on the side and fall into a rose shape

They share a short, smooth coat. However, the English Bulldog can have a wide range of colors. The curly tail is similar to that of a porcine. They may have a corkscrew tail that is slightly longer than curly, but they are not allowed to be bred together by reputable breeders as this type of tail can lead to spinal problems.

Despite their differences, they look kooky, and their flat faces with large puppy dog eyes are what win hearts around the world.

Because of their many skin allergies and other health problems, it is important to ask your veterinarian what food to give them. They may need a special diet or a specific kibble to relieve their symptoms.

The grooming requirements of the English Bulldog and French Bulldog are similar. Both dogs only need to be bathed occasionally, as long as they aren’t getting too dirty from exercising. Once every 2 and 3 months is sufficient.

Remember to use gentle products as you could harm their natural oils and sensitive skin.

The English Bulldog and French Bulldog have short coats. They only need to be brushed once a week. This is just to keep their shiny coats healthy. Both shed when the weather warms up.

Although they are relatively easy to take care of when it comes to bathing and brushing their skin, their skin folds or rolls require more attention than an average dog. If they are not properly cared for, they can emit a musty dog smell. While you should only use the recommended amount of shampoo, it is important to wash them well and dry them completely. To prevent sores or infections, clean between every wrinkle and fold using a special cleaning product and cotton buds.

The English Bulldog and the French Bulldog are both social animals who love human attention. Both love to lie on their master’s laps. They are both very social and don’t like being left alone for long periods of the day. Both have been known to suffer from separation anxiety.

The English Bulldog and French Bulldog make great family pets, because of their small sizes and gentle nature, they can be easily handled by children learning to care for dogs. As with all dogs, children must be supervised at all times.

The French Bulldog is a playful, affectionate dog who loves to be the center of attention. They love to be silly and show off their clown antics. English Bulldogs are much more relaxed than other dogs. It is safe to say that they are one of the most laid-back canine breeds. He loves having fun but will lay upside down, with his legs and belly in the air, waiting for his master to take care of all the work.

The energy levels of the French Bulldog and English Bulldog are similar. They are both low-energy pups who have a great sense of humor. They will need only 20 to 30 minutes of exercise a day, all of which can be a walk around the block for a leg stretch and a toilet break. They are happy to chill out and take a nap all day.

Because they are both Brachycephalic dogs, neither of them copes very well with the humidity or heat, so be sure not to exercise them on warm days. They should be taken for walks only when it is cooler.

The French Bulldog is intelligent, and he will pick up commands quite easily. However, he is also known to be independent, so you must be consistent with your training. You must not succumb to his stubbornness. If you give up, you will lose the battle for training. If you plan to train walking with a harness, make sure the harness is the right size.

The English Bulldog is another breed that is a stubborn and lazy dog. A combination of lazy and stubborn can be difficult to master. This guy is not recommended for first-time owners.

If you are looking for a completely obedient dog, he may not be the right one. He will listen on some days, but not all the time. And, it is rare for owners to drag this dog along the sidewalk for more than a week because he has given-up walking. Bulldogs also need harnesses that fit them, or leash training can be difficult.

The French Bulldog and English Bulldog must be socialized early so that they can interact with all kinds of animals and people.

Brachycephalic syndrome is the most serious health concern for the English Bulldog and French Bulldog. Their flat faces and poor breathing structure can cause problems with their heat management as well as their breathing. During hot days, ensure they are supervised, kept cool, and hydrated.

Overall, the English Bulldog lives between 8 to 10 years, whereas the French Bulldog lives longer, between 10 to 12 years. Both are more likely to have health issues than the average dog, so it is important to take this into consideration if you’re thinking of welcoming one.

The popularity of the French Bulldog has increased significantly over the past decade. This is more than the English Bulldog, whose popularity has been less stable. French Bulldogs are therefore slightly more expensive.

While they may look quite different, it is clear that these two adorable dogs are inseparable. Although the French Bulldog is smaller, he is more playful and mischievous than the English Bulldog.

Whichever breed you choose or who suits your lifestyle best, they are both affectionate dogs that will be loved by everyone.