. The beautiful and agile Pitbull German Shepherd mix is a wonderful friend for the right person. This new breed of designer dog, is known for her love and affection. Also called The German Shepherd Pitbull or German Pitbull, she is a crossbreed of the American Pitbull Terrier with the German Shepherd.

Misunderstood due to the stigma of aggression placed on Pit Bulls as well as German Shepherds, the German Shepherd Pitbull mix is often mischaracterized as an aggressive breed. It is not surprising that both her parents have a negative reputation. This aggression can be caused by a lack or neglect of training, as well as a history of abuse and neglect.

This mix is known for its dominant and strong personality. These pups thrive in a socialized environment. The German Shepherd Pitbull mix is a great addition to any dog-owner’s family. 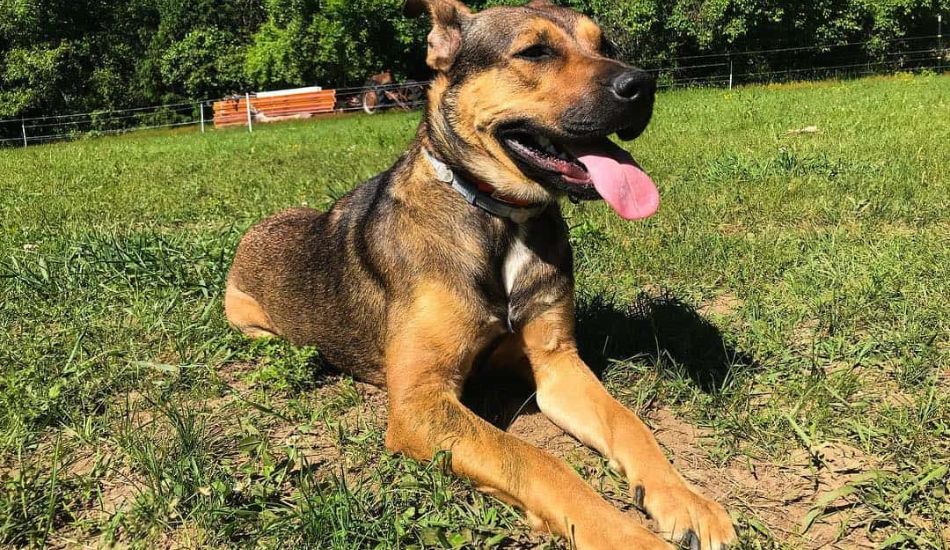 Designer dogs offer many health benefits and endless cuteness possibilities. Perhaps most important, the stigmatization of mixed breeds makes it less likely that these dogs will be adopted.

Understanding the characteristics of designer dogs is important. Let’s find out more about Pitbulls, German Shepherds, and their parents!

Despite their intimidating appearance and reputation for aggression, Pitbulls can be a friendly and well-mannered breed. She is a great family dog and does well with children. She has an average lifespan of about 14 years. Pitbulls are commonly mixed with other breeds and can have a variety of different coat colors including brindle.

The modern-day German Shepherd descends from German herding dogs. She became popular in the United States in the early 1900s and has since become a breed commonly used by the military and police forces due to her intelligence, loyalty, and trainability. She is also a popular choice for Service Animals.

German Shepherds can be both agile and strong, making them an excellent example .. Fully grown, German Shepherds are commonly between 22 to 26 inches tall and between 50 to 90 pounds, with females running a bit smaller than males. She is protective and forms close bonds with her owner.

Your pup is more likely to inherit traits from one parent breed than the other. It is not possible to predict which traits your pup will take from each parent breed. These breeds are often compared against each other, so let’s look at some of the different characteristics of this mix, as well as what you might commonly expect.

It is impossible to predict the appearance of hybrid breeds. Each litter is unique and each pup will get a different set of parent genes. a Pitbull German Shepherd is likely to be more Pitbull-like. She will likely look like a larger Pitbull with a large head and a short muzzle.

Both Pitbulls and German Shepherds are muscular and lean, so a German Shepherd Pitbull mix will be just as strong and agile. She can be bent over or flopped-over her ears quite often.

Pitbull German Shepherd mixes are extremely affectionate if they are raised properly. She can be domineering and will try to lead the pack. She is a well-mannered dog who has had proper exercise, training and socialization. These positive influences will help curb her domineering tendencies. *She can entertain herself but she prefers to be with her family and loves attention. German Shepherd Pitbull Mix dogs make wonderful family pets.

Proper training is especially important for a German Shepherd Pitbull cross. she is a dominant breed of dog that can lead to stubborn or aggressive behavior. She needs consistent effort to train effectively so that her behavior can be controlled. You must also respect her as her leader. The good news is , Pitbulls and German Shepherds are intelligent breeds so she will be quick to learn from other dogs.

socialization and training should be started as soon as the dog is a puppy. usually begins as early as seven weeks. Don’t let this deter you from adopting an elderly dog. Although you can still train an adult dog with the same dedication and commitment, there are some challenges.

are energetic by nature, and can be destructive when bored. Because of her size and temperament, she is not suitable for apartment living. A large backyard would be ideal for her freedom and a fence would help to curb her protective nature.

In general, she requires around 90 minutes of exercise daily, preferably at a brisk pace. Pitbull German Shepherds are not only a physical breed. She is a smart dog and requires a lot of mental stimulation .. You can achieve this through daily training and interactive toys.

Exercise can dramatically reduce many of the naughty behavior patterns that dogs exhibit. The German Shepherd Pitbull Mix’s tendencies towards aggression, destructive behavior and digging can all come to the surface when she has too much energy .. Although she may need to be active more than other breeds, once she’s exhausted, she will settle down and snuggle up with you.

It is important to understand the consequences of owning a larger dog breed, such as higher medical and food costs. Mixed breeds can have unpredictable sizes If you adopt a Pitbull German Shepherd she might reach the upper end of the height and weight statistics. You should be prepared for this possibility and ensure that you have enough space in your home for a Pitbull German Shepherd.

The average lifespan of a well cared for German Shepherd Pitbull is about 12 years with proper exercise and a balanced diet. She is an agile and healthy dog. However, regular visits to the vet are important and she must be up-to-date on her vaccinations.

Hybrid designer dogs can inherit some of the medical predispositions of their parents. Although they are generally healthier than purebreds, hybrids may still be susceptible to certain health problems. This article will help you understand the common health issues for Pitbulls and German Shepherds.

Two major concerns are hip dysplasia, from her German Shepherd side and skin irritation from her Pitbull side. Hip Dysplasia refers to a “disease in the hip where the ball and socket joints are malformed which causes the joints rub and grind instead smoothly.” Demodex is a common skin condition that Pitbulls suffer from. Demodex is a mite that lives in the hair follicles of dogs with weak immune systems .

Understanding these conditions and looking for signs is key to keeping your dog healthy. Regular checkups and preventative care are also important.

Larger, more active breeds require high caloric intakes. The German Shepherd Pitbull is no exception. It is recommended to supply about 3-4 cups of quality, grain-free dry food daily providing between 1200-2700 calories for males and 900-2100 calories for females. Most brands will include a feeding guide on their products based on size and activity.

These are guidelines only. However, it is important that you speak with a vet to ensure you are getting all the essential nutrients and the right amount of calories and protein.

A Pitbull German Shepherd mix tends to favor Pitbull genes in appearances. Her coat is straight and medium in length. Her shorter coat makes her a good choice for warmer climates.

Although German Shepherds often have the same coat color, Pitbulls can come in many colors. Pitbull German Shepherd mix dogs often have fawns, browns, tans, and blacks , but less frequently, white and gray coats. She sheds moderately throughout the year, but is not hypoallergenic.

The German Shepherd Pitbull is an excellent choice if you are looking for a breed with fewer grooming requirements than other breeds. Due to her short hair and moderate shedginess, she needs low maintenance .

A German Shepherd Pitbull mix, due to her sensitive skin, should only be bathed when necessary and no more than once per month. Too much bathing can cause dry skin and strip natural oils. Shampoos for sensitive skin types are also recommended as they are gentler on the skin.

It is vital to keep her ears clean, especially if she bends or flips over. This reduces air circulation and increases the chance of developing ear infections. To keep her paws clean and healthy, she should trim her nails every couple of weeks. To avoid any aggression or fear later on, this should all be done at an early age.

You can find designer dog breeders all over the Internet. A simple search will usually put you in touch with one. Hybrid breeds are becoming more popular so it is important to find a trusted, ethical breeder who acts in the best interests of their dogs. Supporting breeding practices that are questionable can lead to animal cruelty.

Reading reviews and requesting health certificates can help you feel confident that the breeder is legit. Do not purchase puppies from puppy mills ,. These places can be inhumane and often produce unhealthy dogs.

A German Shepherd Pitbull Mix litter size is generally between 5 and 10 pups with a wide range of colorings and personalities. It is a good idea to see the puppies before you buy from a breeder. If the breeder has a unique or distinctive canine, such as a long coat or unusual eye color, it is possible for prices to rise. You should meet your pup to ensure that her personality matches yours.

Pitbull German Shepherds cost $800 and up but can be much lower if you are rescuing from a local shelter. These organizations usually only ask for a donation fee to cover some of the medical expenses so that your pup can return home healthy.

Hands down, adopting a German Shepherd Pitbull mix from a rescue organization is the best thing you can do. This is one of the most popular hybrid breeds that are found in animal shelters. However, they still have a low adoption rate due to their aggression. Many animals are in dire need of loving homes.

Saving a dog’s life is a great experience. This is often cheaper than buying a puppy. Your German Shepherd Pitbull mix might have some behavioral issues that you will need to address. The emotional rewards will outweigh any time spent training your dog. Please consider adopting!

So, is the Pitbull German Shepherd right to be a part of your family? Let’s recap what we learned:

If this sounds like your family then you should look for a reliable breeder or research adoption agencies.

*A Pitbull German Shepherd mix may not be the right fit for everyone. This dog will delight and amaze the right family! Do not let the sensationalized media or unfair stigmas stop you from adopting this intelligent, affectionate and intelligent breed.

Are your skills and abilities sufficient to care for this wonderful dog? You should seriously consider adopting a German Shepherd Pitbull Mix! You will be rewarded with unconditional love and devotion. What could you want in a best friend?