The German Spitz and the Pomeranian share the same ancestry, descending from larger sled-pulling Arctic breeds, they date back almost 6,000 years, and their history has been intertwined ever since.

These guys are originally from Germany, where they were used traditionally as watchdogs and herding dogs. Although they are more common in families, their piercing barking makes them great watchdogs.

At first glance, the Pomeranian and the German Spitz look very similar. However, closer inspection reveals that they are completely different. They are very similar in temperament, as well as many other aspects, but they also have some differences. Let’s go into more detail! 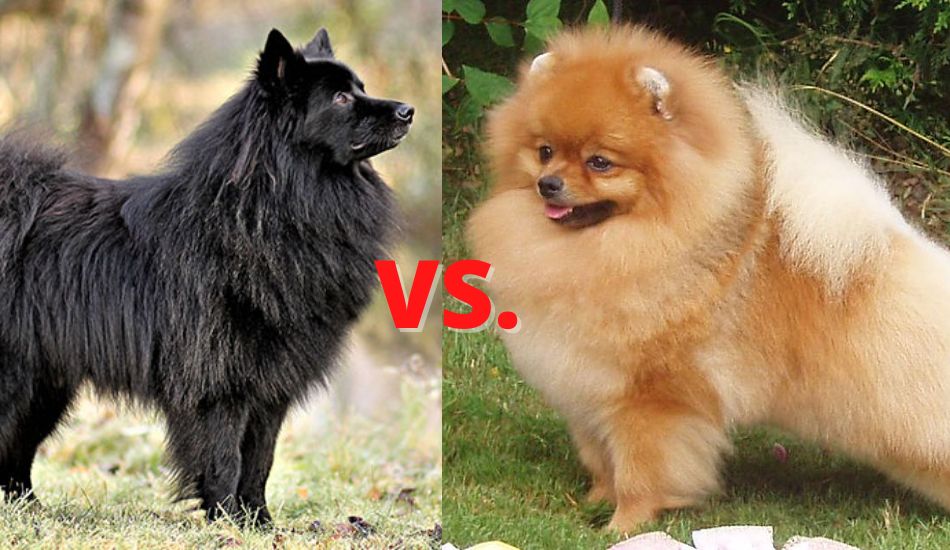 The term “Spitz” is used to refer to many breeds of dogs that are stocky and have thick coats. They also have tall ears and plume tails. Pomeranian can be considered a descendant or just a toy version of German Spitz. Their history is tightly intertwined.

The German Spitz was first documented in the 15th Century in the area of Pomerania, and there they were used as farming watchdogs by the poorer members of society. It was in the 18th Century that his popularity boomed thanks to visiting royal nobles who took a fancy to him. George I, King of England during the 18th Century, had a German wife who was a big fan of the breed, as were all of her visiting friends who also brought their Spitz dogs with them too.

It’s important to remember that there are five types German Spitz breeds:

We will refer to the Mittel Spitz or the medium-sized Spitz in this article. This is the most common way people think about a German Spitz. After World War I, the German Spitz population experienced a huge decline. However, the Keeshond and Pomeranian were bred together to revive the Mittel’s population.

The German Spitz is a new breed in America. He is currently in the Foundation Stock Service Program which allows rare breeds to be recognized by the American Kennel Club (AKC). He is not as popular as the Pomeranian and is therefore much rarer in America.

Additionally, the AKC, the United Kennel Club, and the Canadian Kennel Club are the only major clubs in the world that recognize the American Eskimo Dog as a separate breed; many other kennel clubs see him as the same German Spitz breed.

The name of the Pomeranian was taken from the German province where they were most popular. It is believed that some famous people, like Michaelangelo, favored the smallest Spitz dogs, and Isaac Newton had a Pomeranian who is said to have eaten many manuscripts.

Just like the German Spitz, the Pomeranian became popular in the 18th Century with English Royalty, but the Pomeranians back then were much bigger and not as popular with the masses. This changed when Queen Victoria I stumbled across a 12-pound Pomeranian in Italy. Her lifelong passion was to create smaller Pomeranians. Eventually, he was reduced to the size we now know.

Since then the Pomeranian with his smaller toy stature became an instant hit across the world, and the first Pomeranian to be entered into the AKC was in 1888. He is currently ranked as the 23rd most popular breed in America. The Pomeranian is also known as the Zwergspitz in many European countries.

After the large size difference, their second largest difference is their coats. Both had double cloches that allowed them to stay warm while they tended to their farms and herds in Germany. The German Spitz has a soft, fluffy undercoat, while his outer coat is more coarse and straighter. Whereas the Pomeranian’s undercoat is short and dense, with his outer coat being finer longer fur, which gives him his fuzzball appearance, more so than the German Spitz.

If you wet both the Pomeranian and German Spitz furs, you will see how much smaller the Pomeranian is. Poms come in many different colors, including black.

They also have differently shaped heads and muzzles. The German Spitz has half of his skull’s length, while the Pomeranian has 1/3. The ears of the German Spitz are triangular and visible. They are more prominent than those of the Pomeranian, who have erect ears, but often disappear under his fluffy mane.

Despite their differences, they have similar temperaments. Both are little pocket rockets that can be lively and bouncy for long periods of time. You need to be there for them all day. They will entertain you, cuddle with you, and keep you company. Although they might not be able to exercise their little legs, their minds rarely stop from working.

They are both very sociable and inquisitive dogs who will want to be friends with everyone. They love to cuddle up on your lap and are very affectionate with their families. They are also very friendly with children. However, due to the Pomeranian’s small size, it is important to show your kids how to properly handle small dogs.

Due to their watchdog history, they are very sassy. They have not lost this trait. If you’re looking for a cute dog that can alert you to all things, this is the right breed. However, if your home has noise restrictions or you don’t like barking, these guys may not be the best fit. They are happy around other dogs and will either yap out of excitement or because they like to challenge their fellow canines. They are often hurt by other dogs because of their fearless challenges.

Both the Pomeranian and the German Spitz are firecrackers. They bounce like Tigger from Winnie The Pooh. They are considered to be medium-energy dogs and need up to 30 minutes of active exercise a day. You can take them on two walks per day, provided you entertain them throughout the day. Or they can play in the garden.

Both breeds require a lot of exercise, and they can both be very destructive dogs if they’re bored. Both breeds will need dog toys that are fit for their size, and this is especially true with the Pomeranian.

It is essential to socialize your dog as soon as you can. This will increase your chances of having a calm, well-mannered adult dog. It also makes them more comfortable in different situations. Although they are not shy, their small size can make the world seem larger and more frightening. Socialization helps them become the fearless dogs they should be.

Some people consider his high-pitched bark cute. However, he should stop barking at command. Otherwise, it can become annoying and cause him to pick fights with larger dogs. Proper training will prevent him from getting into trouble.

The German Spitz will consume slightly more food at around 2cups per day. In contrast, the Pomeranian will consume around 1 to 1 1/2 cups per day. As with any dog, giving him top-quality kibble is the easiest way to enhance his health.

Both the German Spitz as well as the Pomeranian require brushing every day in order to keep their hair tangle-free and help with managing their shedding and fuzzy hair.

Neither one of them should be bathed frequently, as long as it is less than once every six weeks. You can bathe them when they are in need of general sprucing.

Dental hygiene should always be a priority for these little guys. Their small jaws can increase the likelihood of them developing dental problems. It is sufficient to brush them at least once a week.

Both the German Spitz as well as the Pomeranian are generally healthy dogs with long lives. The American German Spitz breed is relatively new. There is not much information available to recommend specific tests. However, he has similar health problems to the Pomeranian. It is safe to assume that his parents will have the same recommended health exams:

The German Spitz is a rare breed in America. There is not as much demand for them as the Pomeranian. Whilst there is little information on the price of a German Spitz, it would appear that the average is $800+, which is much less compared to the cost of a Pomeranian, which is anywhere between $1,000 and $3,000.

The German Spitz and Pomeranian have a similar temperament. However, their lives are very different. These little dogs are very active and require special training.

They share a common ancestry and history, and so their similarities almost go hand-in-hand. Despite their differences, both are adorable little fluff balls that are full of energy. These guys will be your best choice if you’re looking for a small dog with a big personality.