The Presa Canario is tougher than the American Pitbull Terrier. They are beautiful and adorable to some, but they can also be frightening to others. While some people think it would be insane to have a dog this powerful, others believe they are the best dogs they’ve ever owned. 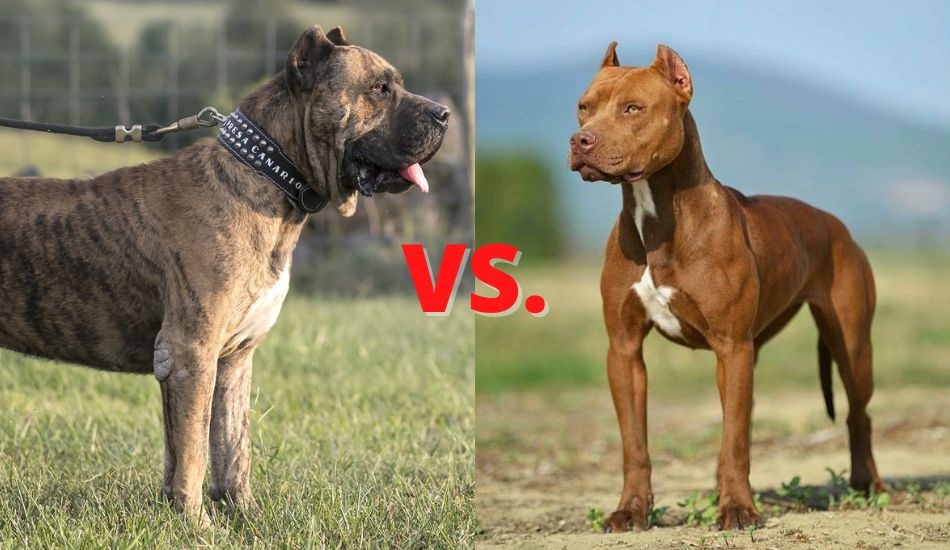 The Presa Canario originated from the Canary Islands and is named ‘Canary catch dogs.” He was originally used to herd cattle, but his primary purpose was to protect his flock from the wild dogs, and to kill them if they tried to attack.

They almost became extinct in the mid-20th Century; however, fanciers of the breed began an intense breeding program in the 1970s, and they are now slowly but surely recovering as a breed. They are primarily used as guard dogs and are not often considered family pets.

The Pitbull was originally bred in England from fighting dogs. He is the result of breeding some of the strongest and most powerful dogs in the ring. After the practice of cruel bloodsport in America was banned, it was soon discovered that they were affectionate and gentle with humans. They are now great family companion dogs.

The Presa and Pitbull are both striking canines that are sure to make people stop in their tracks.

Both of their heads are large and broad, but the Pitbull’s head is more in proportion to his body, whereas the Presa’s head, in his breed standards, is simply described as ‘massive.’ Presas are often mistaken for larger dogs like the Cane Corso.

The Presa is often mistaken for a Pitbull because almost everything in their appearances is similar, except for their size. The Presa Canario can be precisely double the Pitbull’s weight, weighing between 85 to 130 pounds, whereas the Pitbull weighs between 30 to 65 pounds.

The Presa is also taller at 22 to 26 inches from paw to shoulder, whereas the Pitbull measures 17 to 21 inches. Both are powerful and strong, but the Presa is noticeably larger than the Pitbull.

They have similar coats. Both are short and shiny. The only difference is that the Presa’s coat is slightly coarser than the Pitbull’s coat, which is smoother. You can find the Pitbull in every color, except merle. Although the Presa is also available in a wide range of colors, it’s not quite as extensive as the Pitbull. You can find him in a variety of colors, including silver, gold, and brown. The color “tiger” is also on the list.

These guys are more difficult to groom. They can be washed once every two months, as they don’t have a strong smell.

Neither has an undercoat, so they shed very little. A weekly brushing will keep Pitbull’s hair shiny and healthy, as well as remove dead hair and encourage hair growth. Because his hair is slightly coarser, the Presa could use two brushes per week. It is best to brush your hair every day during the shedding season, usually in the spring.

Both breeds tend to drool, so if there is a chance you can’t handle wiping slobber from your furniture and clothing, you may want to consider another pooch.

The Presa will need slightly more food than the Pitbull at three cups a day, whereas the Pitbull only requires 2 1/2 cups of Pitbull age-appropriate dry kibble each day. The best way to keep your dog healthy is to give him top-quality kibble.

A popular debate is whether you should make your own food or feed your dog commercial food. Because the nutrition value of store-bought food is clearly visible on the packaging, it is more popular. It is often stuffed with preservatives, flavors, and excessive fats.

Homemade food calls for more thought and work, often requiring you to calculate your dog’s macros and come up with a dietary plan for their needs. Before you attempt this feat alone, it is best to consult a qualified veterinarian nutritionist.

Although they look similar, their personalities are very different. First, the Presa is not for first-time owners, while the Pitbull can be submissive as long as you’re a dominant leader.

The Presa Canario is too dominant for novice dog owners. He will continuously challenge his owner for the top-dog spot. This is not something to be taken lightly. If he feels that you are not dominant enough, he can become aggressive and potentially vicious. You will never regain control of the position once you have lost it.

Although the Pitbull needs a strong master, the average Pitbull will not question the status quo. Presa’s shouldn’t be brought into homes with children or other animals. They will see themselves as superior to the rest of the pack and can pose a danger to everyone.

On the other hand, the Pitbull was bred immediately after his career in dogfighting ended to become a family friend, contrary to what the media would have you believe. Pitbulls with gentle and affectionate traits were used only for breeding. They are usually loving family pets unless they are sold in illegal fighting rings.

Pitbulls are friendly dogs and would make a great companion dog.

The Presa Canario is a great guard dog. He was originally left out in the field to protect his flock. He would fight off predators and exterminate them if necessary. This skill is still evident in the Presa, so you can be sure that no one will attempt to enter your home with him around. Even though he’s not a guard dog, Presa will still protect his master and family. He is also very suspicious of strangers, even after their master has opened the door to them.

The Pitbull will welcome any person to his home with open arms in the hope of becoming their best friend. He does not make the most effective guard dog.

Despite all of this, the Pitbull and Presa are loving and enjoy cuddling on the couch with their family at the end of the day. Both think they are about the same size as a Chihuahua. You will often see them laying on your lap. Both are very attached to their masters, and they are affectionate and clingy, particularly the Pitbull.

Although similar to the Presa, the Pitbull displays fear and aggression towards other dogs. Although this behavior isn’t the same for all Pitbulls or Presas, it is the general consensus among owners.

Both of these guys need early socialization with many dogs of all shapes and sizes, as this will increase your chances of having a canine that doesn’t exhibit these aggressive tendencies.

Training obedience is vital for both the Pitbull and the Presa, but especially the Presa. The Presa should be taken to obedience classes with a professional trainer who is familiar with Presa dogs.

While it is important to train the Pitbull consistently, training with Presa will require a lifelong commitment. They are wonderful creatures once they have learned obedience.

Both the Presa and the Pitbull are average energy dogs, and they will both require up to 60 minutes of active exercise a day. This cannot be limited to a slow walk around the neighborhood like with other breeds. They need to be active and engaged in activities such as agility training, running with their master or playing interactive games like fetch or frisbee.

Be aware that the Presa will see any game that involves a challenge of power as a fight for the top dog in the family.

The Presa will take fewer naps between intense activity sessions. Whereas the Pitbull is likely to be more demanding between the two breeds and will require more mental stimulation. If these dogs aren’t properly exercised, they can become bored and destructive. These dogs can indeed cause a lot of damage. If you are not able to commit to properly exercise them, you should look at other breeds.

The Presa and the Pitbull are generally healthy dogs; however, the Presa’s lifespan is 9 to 11 years, whereas the Pitbull lives much longer at 12 to 16 years.

Both are susceptible to Elbow and Hip Dysplasia which is an abnormal formation of the joints that can lead to painful arthritis. Aside from this joint problem, Panosteitis and Osteochondritis Dissecans are common in the Presa because he carries a lot of weight.

The Pitbull may develop Cerebellar Amyotrophy, which affects his coordination. This is due to a part of his brain having been damaged.

The Presa costs on average, between $1,800 and $2,000, from a reputable breeder, whereas the Pitbull costs between $800 and $1,000. The significant price differences can be attributed to supply and demand.

Pitbull rescue centers are overflowing with shelter dogs, while Presa Canario puppies and breeders are very rare. The high demand drives down prices but makes it more difficult for people to adopt. Before you look for a breeder, consider visiting your local shelter to adopt a Pitbull.

The Presa Canario and American Pitbull Terriers are very similar in appearance. However, the Presa is the larger of the two. For inexperienced owners, the Presa can be difficult to manage. The Pitbull is easier to train and maintain.

You can train them to the same standard and maintain the pack order. They will be loving companions with their families.

If you’re still having trouble deciding between the Pitbull and the Presa, the best thing to do is think about what purpose you want your dog to serve. The Presa is the best choice if you’re looking for a guard dog. If you want a dog to be a member of your family, the Pitbull is the right one.