Quick Summary: The white Pitbull’s appearance is the same as any Pitbull, but they are rarer than a pure black or brown Pitbull. Unfortunately, the white Pitbull, like all Pitbulls, has a bad reputation. However, they tested nearly 1,000 Pitbulls, and almost 90% of them passed the personality test. This score is much higher than other family favorites canines. The white Pitbull is nearly the same health-wise as other Pitbulls. They are a very healthy dog breed that will enjoy a lifespan of 12 to 16 years.

Is the white Pitbull a rare breed, or is it just as common? Some breeders charge more to have a Pitbull with white hair. But why? White Pitbulls are born with a white coat and are often bred by breeders for this purpose. In any case, make sure your puppy is a white pitbull and not a Dogo Argentino.

The American Pitbull Terrier has a wide range of coat colors. From silver, fawn, brindle or reverse brindle, red, or blue, he pretty much has a choice of the whole doggy rainbow spectrum. The most popular and beautiful color is brilliant white.

This guide will show you the snow king in all of his glory. His looks, his temperament, and what makes him unique from other American Pitbull Terriers will all be examined. We will also look closely at the genetics behind his gorgeous jacket. We’ll also explain the differences between him and Pitbulls with albinism or leucism.

Do you want to learn more? Let’s dive into the world of beautiful white Pitbulls. 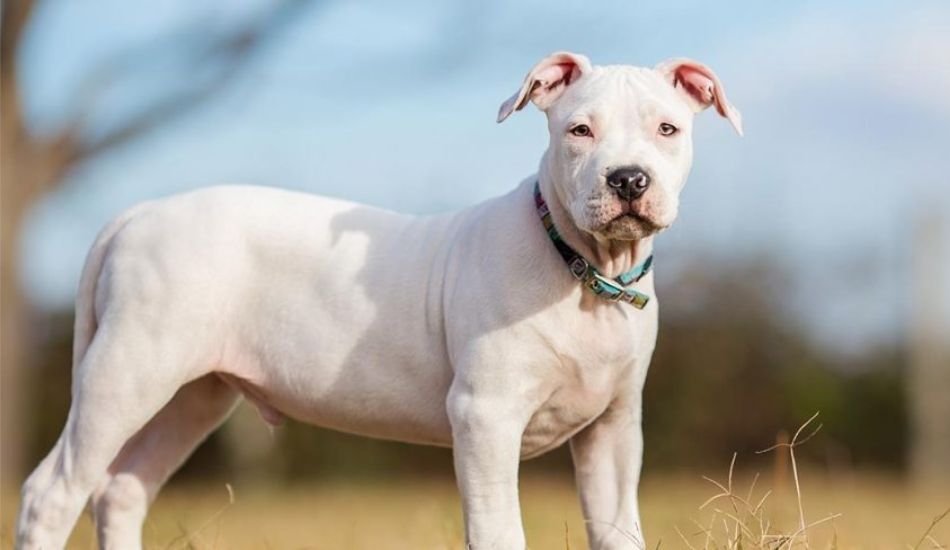 Here’s what you can expect from a white Pitbull. In the 19th Century, the British favored dogfighting. For their fighting abilities and strength, they crossed Terriers and Bulldogs. These were Pitbull’s ancestors. Their humans took them to America to carry on the sport after it was banned.

The biggest and strongest dogs were bred to produce bigger dogs, which is what gave rise to the American Pitbull Terrier. His past history of dogfighting and rat-pitting has earned him an unfair reputation. He is now becoming more well-known as a family favorite. They are the same color as any other Pittie, and white Pitbulls were always around. They are rarer than other Pitbull colors.

The white Pitbull is rarer than a pure black or pure brown Pitbull. Why is that? It has all to do with his genetics. Genetics can be a complex subject, so we’ll try to simplify it for you, so you don’t get bored. You will need to learn a little science lesson to understand his white color.

All animals, including the adorable Pitbulls, are born to two parents. Each parent contributes half of a gene to a specific characteristic. Together they form a whole gene. The makeup of each gene determines every aspect of his body, including his coat color. There are dominant and recessive genetics, and the dominant gene will always prevail over the recessive.

All Pitbulls are born with two base colors. They are determined by the locus A, also known as agouti genes. These two colors are red and black, but they can be altered by other genes. All dogs have one of these colors. White-colored dogs have the ‘S’ gene.

There is a choice of four types for the ‘S-allele:

The Pitbull is a carrier of all four ‘S’ alleles. A white Pitbull can have either a red or black base. However, the ‘S” allele covers his entire coat with the color white. Other features, such as his skin, nose, and lips, are the same as any Pitbull. They can also be black, brown, or blue. His color allows you to distinguish between a Pitbull with albinism or leucism.

Understanding albinism or leucism is important when it comes to white Pitbulls. The beautiful white Pitbull you are looking at could be an albino Pittie and not a Pitbull. You need to be able to recognize the health issues associated with albinism.

Albinism is a rare genetic mutation that affects all living creatures, including humans and plants. A Pitbull who is albino will have no pigmentation in their hair or skin. To be an albino Pitbull, both his parents must pass on the mutation. His body cannot produce melanin because he has two mutations.

Albino Pitbulls are susceptible to many health issues because melanin does more than control pigmentation. These health concerns make them less likely to survive without intense help. There isn’t any significant relationship between leucism and other health issues.

How can you tell if a Pitbull has albino or leucistic eyes? Their eyes will be very translucent or very blue because the Pitbull’s blood vessels are translucent. Leucistic Pitbulls will have deeper pink features and ever so slightly bluer eyes. Experts sometimes make mistakes,  so it is unlikely you can tell the difference without medical testing.

The white Pitbull’s appearance is the same as any Pitbull. His nose, lips, and other features will usually be dark brown or black. His eyes will be either blue or brown. This will depend on his genes from his parents.

A white Pitbull is an average-sized to a large dog who is muscular and stocky. He will measure between 17 and 21 inches tall, and he will weigh between 50 and 65 pounds. His white coat, which is two-layered, is sleek and short. His jacket is extremely tight and requires very little grooming. His long, thin tail and wide, cheeky grin result from his long, thin tail.

The white Pitbull, like all Pitbulls, has a bad reputation. For those who have studied Pitbulls, they are among the sweetest dogs. The American Temperament Test Society (ATSS) tested all breeds of Pitbulls to put his reputation at ease. They tested nearly 1,000 Pitbulls, and almost 90% of Pitbulls passed the personality test. This score is much higher than other family favorites canines.

He is loving and sweet with his family and loves nothing more than spending every moment with them. He’s always up for an adventure, snooze, or a game. He’s a lot of fun and great entertainment for the entire family. He is very eager to please his master and is highly trainable.

The white Pitbull is so friendly he makes an excellent guard dog! He is a different animal than his unjust reputation. If he has been socialized as a puppy, he can be great with other dogs. He can be fearful and aggressive, but this is just as with any dog. Given his past rating, he doesn’t like rodents or smaller animals.

The white Pitbull is a lively, energetic, and fun-loving animal. He needs at least 60 minutes of exercise every day, come rain or shine. He will enjoy whatever you do. This makes him an excellent exercise partner. He is intelligent and very active, so mixing up your exercise sessions will be a great idea.

He also needs plenty of stimulation throughout the day, be that solo play with indestructible toys, interactive games with his family, or training sessions with his master. He can be destructive and problematic if he doesn’t have an outlet. Don’t get this breed if you cannot commit to your pet’s exercise needs.

He is loyal, eager, and intelligent. He is also a very trainable dog that can quickly pick up commands. He will quickly become your favorite pet if you use the positive reward training technique. It is also important to socialize your white Pitbull with other dogs from a young age. Mixing him with other dogs regularly will help keep his polite pooch manners up. If you plan to have a walking or running partner, make sure that you train your Pitbull with a proper harness, so you don’t run into any issues.

A white Pitbull needs minimal grooming. He will only require a brush once per week. During the shedding seasons, or if you have dark-colored decor, you may want to brush him twice a week to keep his shedding manageable.

Look to wash him once every 8 to 12 weeks to keep him smelling and looking fresh. Most Pitbulls have sensitive skin, so it’s a wise choice to invest in a gentle doggy shampoo. White dog owners may choose to use a whitening shampoo to maintain their dogs’ gleam. You can choose a high-quality, natural-based whitening shampoo if you decide to do so.

A white Pitbull needs high-quality kibble that will give him a well-balanced diet and keep his energy levels up throughout the day. Because he is an energetic dog, we would advise feeding him kibble with at least 25% protein. To keep his gorgeous coat shiny and healthy, he should also eat kibble which is high in omega fats. Every day, he consumes 2/3 cups of food.

The white Pitbull is nearly the same health-wise as other Pitbulls. He is a very healthy dog breed that will enjoy a lifespan of 12 to 16 years. Hip dysplasia is the most common condition. Skin conditions are also a concern. Although some evidence supports the idea that white dogs are more susceptible to hearing loss, solid research does not support it.

The white Pitbull is more susceptible to UV rays. It is important to keep your Pitbull out of direct sunlight. Doggy sunscreen will be applied to areas with less hair (e.g. his ears, muzzle, and mouth).

The white Pitbull is rarer than other Pitbulls, so expect to pay more. The average price of a white Pitbull from a reputable breeder is between $1,000 and $3,000. Look for breeders who can show you the puppies and their parents in person. A professional website and verified reviews from past customers are essential.

Avoid puppy mills. Not only are their pups less healthy, but they will also likely sell you an albino puppy disguised as a white. They may also inbreed white Pitbulls to increase the likelihood of breeding unhealthy dogs. If you want healthy white Pitties, avoid puppy mills.

If you’re interested in a white Pitbull, it is important to meet the parents and puppies before making a financial commitment. You could also rescue one of the many Pitbulls in rescue centers all across the country. A great place to start is the Pitbull Rescue website.

Avoid puppy mills and other breeders who don’t care about the dogs’ health. There is also the possibility of buying an albino puppy instead of a pure white Pitbull. We recommend sticking with a true white Pitbull. If you have an albino Pitbull, they can be just as sweet and loving. Please don’t breed them just for their puppies.